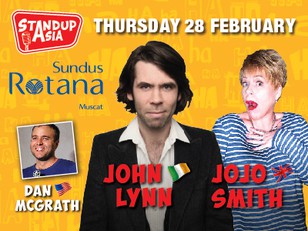 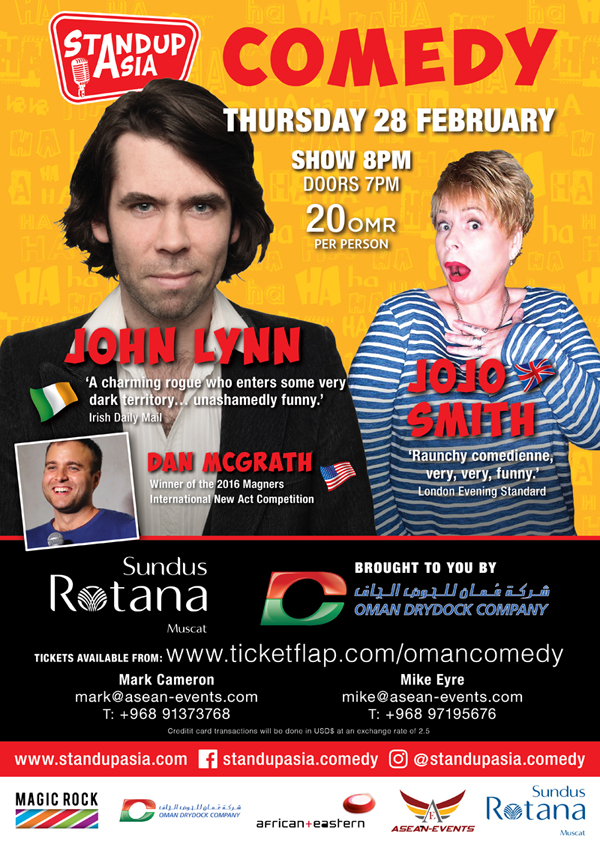 with JOJO SMITH and DAN McGRATH

‘Cracking comedy.  Has a finger on the jittery pulse of our cash strapped age, well worth watching.’

JOHN LYNN, comedian, actor, and writer, first caught the stand-up bug after a visit to a comedy club in Dublin, ‘quickly discovering that making a clown out of himself wasn’t all that bad.’  With his laid-back delivery and natural stage presence, LYNN instantly made a splash in his native Ireland.  Within eight months of his first gig, an unheard-of-feat for a newcomer, LYNN appeared on RTE’s The Liffey Laugh.  Soon after being invited to join Irish star PJ Gallagher on tour, LYNN was starring alongside the legendary Tommy Tiernan, launching himself as a powerful performer in his own right.  Cementing his status in the stand-up world, LYNN accepted an invitation to perform at the prestigious invite-only Montreal Just for Laughs Comedy Festival, toured around South Africa, America, Europe, and the Middle East, and finally made his long-awaited debut at the Edinburgh Fringe with his solo show, Social Networking.  In addition, he joined Tom Stage on his nationwide tour playing to packed houses across the UK.  LYNN has recently been snapped up to record, release, and distribute his first stand-up DVD, alongside completing his first novel, and working his way up the stand-up ladder.  Don’t miss the eyeball popping intensity of this ‘rising star of Irish comedy’ (Sunday Times) this February in Oman.

JOJO SMITH has gone from journalist to open spot to late-night TV personality, from global fame on the internet to international comedy performer.  SMITH made a name for herself as a chat show host with guests that included Jimmy Cricket, Lee Evans, Jo Brand, and Rich Hall on her self-written show, Funny Business.  A sold-out tour as support to Craig Charles quickly got her topping the bills at venues all over the UK.  She made her solo Edinburgh Fringe debut in 2016 with her critically-acclaimed autobiographical show, I Was Mick Jones’ Bank Clerk.  Since then, she has made an impact with sold out tours across Europe, South Africa, South East Asia, Australia, China, and UAE.  ‘A manic force, leading where male stand-ups fear to tread’ (Sydney Morning Herald), don’t miss this ‘in yer face with a twinkle in her eye’ comedian on stage this February.

Do not miss JOHN LYNN (IRL) with special guest JOJO SMITH (UK) and host DAN McGRATH (USA).  Tickets are on sale now for 20 OMR per person.  Get your tickets today on TicketFlap: www.ticketflap.com/omancomedy

STANDUP ASIA is a part of Magic Rock, a Singapore-based events company that organizes comedy festivals and other events throughout Asia.  It has brought international headliner comedians, such as Doug Stanhope and Bill Bailey, to vibrant, multicultural audiences across the region.  For more information, please contact Sammy Grill: sammy@magicrock.com.sg |web: www.standupasia.com | facebook & instagram: @standupasia.comedy