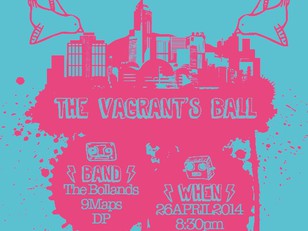 About The Bollands :
A piano, a guitar, some beers and a beard.

Always on the road, this folk duo have been foot-stomping their way through the world. From Taiwanese pizza rooftops, through the dirty streets of India to international music festivals, The Bollands are on a mission to play everywhere for everyone.

Joyce (piano & percussion) and Christian (guitar) come from pretty different backgrounds. Joyce hails from Malaysia and moved to New Zealand when she was a wee lass. She was bombarded with music, studying the classics and sitting numerous exams. Christian, however, spent his early years in a house truck travelling New Zealand with a bunch of dirty singing hippies. It is this mash of backgrounds which makes The Bollands sound.

They play hearty folk songs about the twists and turns of life. Their aim in life is to get everyone stomping and singing.

Since moving to Hong Kong, The Bollands have been super busy releasing their new album, playing at music festivals, jamming live on numerous radio and television shows, playing gigs with amazing musicians and generally making a nuisance of themselves.

They were marked out by Time Out magazine's ‘Shining Lights’ feature as the local band to watch in 2011, and by CNNgo as one of the 'Best Hong Kong bands to rock out with'.

Opening for international acts in HK such as Elbow (UK), Metronomy (UK), The Naked and Famous (NZ), Lenka (AUS), and the Jezebels (AUS); touring for music festivals around Asia such as Uptothesky (SG), Rrrecfest (ID), and Urbanscapes (MY), and performing at HK's Clockenflap in 2011 and 2012; 9 Maps flourish on the largest as well as most intimate of stages.

Since 2007, DP have been one of Hong Kong's loudest, proudest and beardiest bands. With just two members, the bass and drum duo have carved their own path on the Hong Kong music scene with a musical style that blends heavy rock with metal for the masses. In 2008, Time Out Hong Kong named DP one of the city's leading musical acts and went on the following year to list the band's Sabbath-induced sledge hammer hit, Supermegadon, as one of the city's top tracks in their Top 10 Singles of the year list.

On top of several shows in premiere HK venues like Kitec, XXX, Grappa's Cellar and The Fringe Club, they've also busted out of the territory to make some noise in distant lands such as Vietnam, Australia, the UK and the US. To date they've shared the stage with more than a few big names in music, from NYC's Ratatat and The Secret Machines to the UK's The Vaccines and The Charlatans. DP have also made it to some of the world's most acclaimed music festivals: the band took part in Oxford's Truck Festival in 2008, Australia's One Movement Festival in 2009 and SXSW (South by South West) in 2010.

Off stage, DP worked with Regurgitator's Quan Yeomans to create a 'monster' of a music video for the track Velvet Tiger (which can be viewed on YouTube or DP's facebook page) and released a 7-inch vinyl record for the single, My Hyena. The band have also recently released a full length, self-titled album which is available worldwide on iTunes.