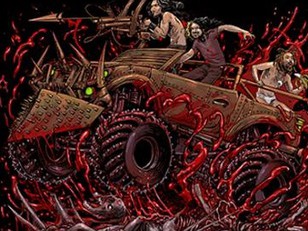 In February-March 2001, guitarist & founder of the band Tomer H., after a long search for band members to form a death metal band in his area, hooked up with vocalist Michael Z. and another guitarist Tal L. and kept on searching for other band members. By April 2001 Tomer found a drummer and a bass player Dani S. After some practicing and shit progress Tal was kicked out of the band and got replaced by another guitarist, and later on Dani decided to quit the band for personal reasons. After that the band was about to crumble and fall apart.
By August 2001 the band wasn't active at all, the drummer and guitarist were no longer real official members and so Tomer decided to bring back Tal as a bass player. After that the band searched for guitarists and drummers for months. Playing with several drummers and guitarists and constantly looking for steady players. By January 2002 the band decided to stay with one guitar only, and didn't yet have a steady drummer. Meanwhile the band's style became more and more brutal and extreme, and so did all its content. By February 2002 the band had a steady drummer Monk, and was playing brutal death metal, song writing and progress were still slow, yet the band remained solid for a while.
By March 2002 bass player Tal decided to quit the band once and for all. The remaining band members were Monk, Michael and Tomer. Playing with a couple of more bass players which failed to fit in, the band soon drowned back to the old days of no progress and no full lineup. It was April 2002 when Monk decided to quit the band leaving only Michael and Tomer. After a while as Tomer kept working on some more song writing, old member Dani S. joined the band again re-inforcing the progress of the band and in August 2002, Monk joined the line up again. Not so long after that on October 2002 Monk decided once again to leave the band for good and quickly the band found a new drummer Jonathan D. which joined the band quickly afterwards. And on December 2002 Vocalist Yaron S. joined the band Creating a never before solid line up, to form one of the most brutal bands ever built in Israel, now entitled Viscera Trail.
On march 2003 the band got split-up, and was reformed by Tomer H. on July 2003 with new line up which consists of Tomer H. (Guitar/vox), Dani S. (bass) and two new members Yinon T. (Drums) and Shahaf O. (Vokills).
On January 2004 Dani S. has left the band one more time. and was replaced on February 2004 by Yaniv K. on Bass. On April 2004 the song "Hack Till Gravy" was recorded at the Groove studios and by May 14'th 2004 Viscera Trail Gave their first live show at the Patiphone club in Tel-Aviv.
On October 21'st 2004 Viscera Trail entered the Groove Studios once again to record their debut EP "Piled Up Dead", consisting of material written between the years 2002 and 2003.

●●●●●● ●●●●●● ●●●●●● ●●●●●●
Cadaver is a death metal band based in Hong Kong. Formed in 2003 by the original members Tak, Wai, Ming and BS, Cadaver has since been featured in many underground metal gigs as well as the iconic Noah's Ark Extreme Metal Festival in 2005. Unfortunately, the band was shortly dismissed due to unforeseen problems. In late 2009, Tak reformed the band with founder members Wai and Ming, as well as new guitarist Jason. This line up was featured in Hong Kong Extreme Metal Festival in May 2011. By the fall of 2011, Ming had left the band, and two talented members, Wilfred and Sean, had joined to continue the efforts of Cadaver.

In 2014, activities were suspended due to personal reasons. Kevin joined the band in 2015.